Capture more than your opponent, collect points, and evolve your cards to increase your attack, defense, and attack arrows.

Click on a blue card on the right side, those are yours, and place it on an available spot on the board by clicking on the empty spot. Use the arrows to capture or battle the enemy's card the arrow points to.

During your turn, you select a card to play and then place it on the board to end your turn. When your card is adjacent to an opponent's card and your arrow points to the opponent's card then: 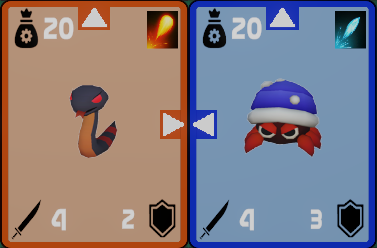 Battles occur as soon as a card is placed adjacent to an opponent's card and both cards have arrows pointing towards each other.

The card placed is known as the "Attacking Card" while the adjacent to it is the "Defending Card". 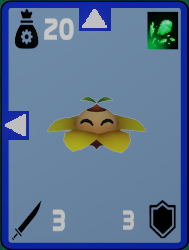 Attack is calculated by taking the bottom-left number of the "Attacking Card" and rolling a dice that many time times.

Defense is calculated by taking the bottom-right number of the "Defending Card" and rolling a dice that many time times.

An Elemental Bonus is added to either card if they have an element bonus over the other. This bonus is a x1.5 attack or defense increase.

Your attacks and defense get an elemental bonus when you attack a card that has an element that is weak to yours:

You earn points each time you capture a card. Points are doubled if you win the round.

At the end of each round, a dice is rolled to select cards at random from your hand to increase their experience by the points you earned during battle.  When your card reaches zero it evolves!

Evolutions causes your card to gain +1 attack and defense plus an additional arrow is randomly added to your card based on a dice roll.

Special Thanks to Michael P. for offering some design ideas.

This was a lot of fun, I'm a sucker for card games and this was really fun to play! It's not often that I want more out of a Game Jam game but I want to pick my team, and my card backs, and I want to choose my evolution, and I want my opponent to get salty when I play a good move, and I want to place block cards, and I want an avatar with cool hair, and...ya know what, I'm just going to play again. Thank you!

I would actually really want to play this as a full fledge game, super fun concept and enjoyed the execution of the randomness! Art was great of course, and I got hooked on trying to get my guys to evolve. Actually my favorite game in the jam so far!

Thanks for playing. I'm actively working on polishing the prototype so I can get started on the alpha

This was super fun! As someone who's grown up with Pokemon I loved playing this. Very easy to understand and play, had me hooked!

I'm happy you got the reference :D Thanks for playing! 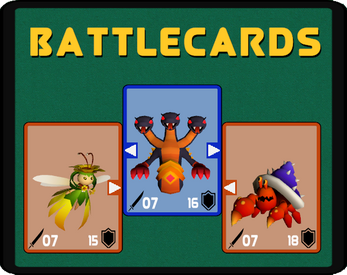